AIMS Ireland Statement on the publication of Judge Maureen Harding-Clark’s report into the Surgical Symphysiotomy Ex Gratia Payment Scheme and media commentary on the same. 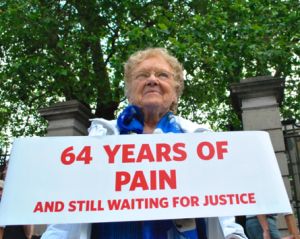 The Association for Improvements in the Maternity Services (AIMS) Ireland  is outraged at the suggestion that the survivors of symphysiotomy have exaggerated, or been in some way dishonest, in their claims in what has been a long and difficult struggle for them, in the pursuit of justice.

We at AIMS Ireland know that women are very slow to expose themselves to legal proceedings, especially when they have been traumatised in the past. The fact of the matter here is that medical records are missing.

We are very disappointed that Judge Maureen Harding-Clark has made completely unfounded accusations of dishonesty against elderly women and their supporters, based on a lack of documentation and records.  At the same time, she fails to hold the hospitals and medics responsible for not keeping that documentation, as is their responsibility.

Further, AIMS Ireland is at a loss to understand why, in an era where women not only had no access to abortion, but also had no access to contraception as well as no legal right to not be raped within marriage, women who had further pregnancies after symphysiotomy are deemed by the judge to not have been traumatised by the symphysiotomy. Women of the time had no say over whether they became pregnant or not regardless of their state of health and wellbeing, and as of course is still the case, they had no say over whether they remained pregnant or not. Becoming pregnant was not something a woman had any say whatsoever in.
This report is a further violation of those women, who are and were entitled, in their latter years, to expect more of a state that claims, with little evidence, to be more enlightened.

Women who have experienced mistreatment know that it has happened. They are neither hysterical nor litigious as suggested by those who should know better. It is beyond belief, that those practicing medicine in today’s world, would turn to the ancient argument of the hysterical woman.

The biggest issue for AIMS Ireland today, is the establishment’s complete failure to hold a mirror to its practices both past and present.  It demonstrates to women today how little value is placed in their well-being.  It further illustrates that ‘the professionals’ in this country have rights over women’s bodies which would not be given in other jurisdictions.

There is no valid reason for the fact that though symphysiotomy was dropped and even banned as a procedure in other Western countries, it continued to be used in Ireland as late as the 1980’s, no matter how frequent its use was.

Points have also been made regarding the life-saving potential of symphysiotomy in specific situations. No one is questioning that.   We are questioning the medical need to perform these procedures in Irish hospitals in the years in question, when evidence showed a caesarean section was a viable alternative.

We at AIMS Ireland find it appalling that women’s experiences, trauma and injuries at the hands of what was a highly patriarchal and religious-led maternity care system, could be so lightly dismissed, and their suffering labelled as in some way “normal”.

Women should not be suffering either emotionally or physically after childbirth in Ireland.