How does the 8th amendment affect continuing pregnancy in Ireland? AIMS Ireland

AIMS Ireland were invited to make a presentation at Leinster House on the effects of the 8th amendment on continuing pregnancy. This is a transcript the presentation made by AIMSI Chair Dr. Krysia Lynch to TDs Senators and Ministers on the 23rd November 2017. Other presentations were made by Philomena Canning of Midwives for Choice and Ruadhán Mac Aodháin barrister at law and junior counsel in the case of HSE vs B in September 2016. 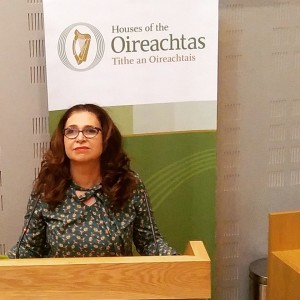 Introduction: Thank you for this opportunity to present the view point of the service users of the Irish Maternity Service as to how their experience of continued pregnancy has been affected by the 8th amendment

2. Philomena has shown how the 8th Amendment is treated in the HSE’s consent policy. This is reinforced by the National Maternity Strategy, and I quote:

“Where an assessment is made that the informed refusal would not threaten the life of or have a deleterious effect on the baby, then the woman’s choice of informed refusal should stand. However, where there are implications for the health or life of the baby, as defined by her team of health care professionals, then the HSE’s National Consent Policy recommends that legal advice should be sought.”

3. In March 2013, a woman in Waterford – Mother A – was looking forward to her new baby. Her partner was out of the country and she was sure that he would make it for the birth, as she had at least two weeks left on the clock, or so she thought. Not according to her consultant, who felt that by holding off on an induction by C-section, she was putting the life of her baby at risk, because, in his opinion, she was past her due dates. An application was duly made to the High Court for a forced sedation and forced C-section, with Mother A being given free legal aid. As the judgement was due to be read out Mother A later ‘consented’ to the C-section. A consent given under extreme duress.

Feedback from women tell us that this case is routinely held up and referred to by hospital staff wanting to ensure pregnant women comply with hospital induction policies, and hospital patients are quite routinely told “if you don’t come in for your induction the guards will be called out on you”.

So the spectre of this and other cases hangs over other women every day compounding the anxiety and fear that many women may feel about giving birth.

4. Nearly 3,000 women took part in our latest survey. As many as 38 per cent stated that their consent was not sought for tests and procedures during pregnancy. Half of all those surveyed said they were not given any opportunity to refuse such diagnostics or interventions. One woman in every three reported that tests and procedures were carried out during labour and birth without their consent. Again, half of all those who responded reported that they were given no opportunity to refuse such diagnostics or interventions during labour and birth.

5. While these statistics may appear shocking, the reality behind them is even worse. One woman explained that most interventions were presented as a given. “We have to do such and such” was how staff presented them, ruling out the possibility that a woman might have any input into the decision as to what was going to be done to her body.  Another said she felt ‘badgered’ into submitting to an syntocinin drip, which, as Philomena has pointed out, has been associated with fetal deaths. A third said that when she and her husband questioned tests, they were told they were putting their baby’s life in danger.

6. The emotional effect of being coerced or being unable to participate in your own care has been shown to influence mental and emotional well-being in the postpartum, leading to conditions such as anxiety, depression and PTSD.

7. Women need to be supported, and treated with kindness and compassion when they are having a baby. Instead of being coerced into unwanted interventions, they should be given the evidence they need to exercise informed consent. We cannot begin to work towards this human rights standard in maternity care unless the 8th Amendment is repealed in its entirety. 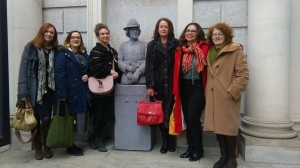 “Consent was sought at all times but I felt pressure that the only option was to agree with what was proposed.”

“Formally yes (consent was obtained), but I wasn’t in favour of being induced, it was never presented as an option but rather as a decision made on my behalf.”

“Most things were not presented as a choice. “We have to do such and such” was the usual “choice.”

“I repeatedly impressed my wish not to have oxytocin and this was disregarded and I was treated like I was being silly. I reluctantly agreed but I felt badgered into submission rather than consenting.”

“In the hospital and with the doctor unless I refused the procedure it was assumed that I would go ahead with it. I was told that it was happening, not asked if I wanted it to happen.”

“The tests they did were as far as I was told compulsory and results were just told to me and options were not discussed it was there way is best. When we questioned it we were told we were putting our baby’s life in danger.”

“I felt that I could not say no to anything.”

“I refused plenty, but they weren’t put as questions.  Statements like “we’re just going to” or “ok, so now we’ll” had to be responded to quickly with a NO, you won’t, and that wasn’t always “heard”.

“I didn’t have a say in how I wished my birth would go, I felt like I was a number and didn’t matter….. I felt the consultants team members were dismissive of my feelings regarding their choices for me and felt like I was a puppet with no voice. Going through a first pregnancy is scary enough without being made feel like I had no control or say with anything that was to be done to my body. Communication needs to be improved greatly, a woman should be made feel part of the process not just an instrument in it! (Service user) “

“There is so little respect shown to women in Ireland during the process of birth which should be a happy occasion. You’re just treated like a slab of meat in a hospital (Service user)”