Removing the 8th amendment: How it will affect danger to women’s health 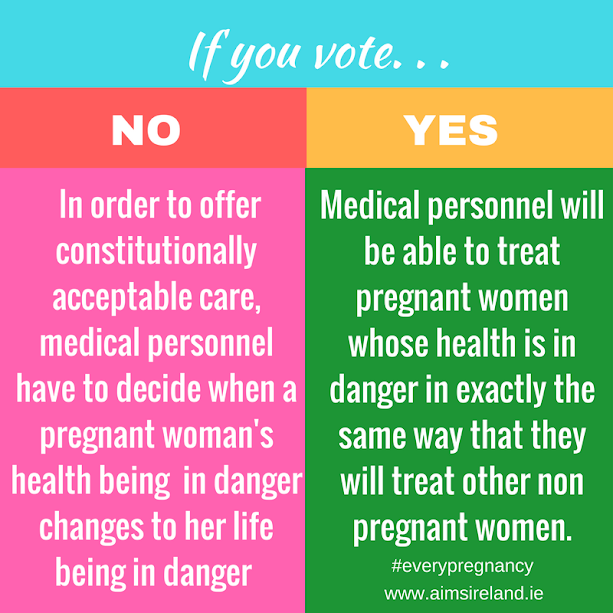 At present due to the presence of the 8th amendment in the Irish Constitution,  when a woman becomes pregnant, she is only entitled to an abortion in Ireland if her life is in danger, but not if her health is in danger. An abortion has to be life saving (either physically or mentally) to be legal.

Direct threats to life during pregnancy result in some 24-26 abortions performed in the Irish Maternity System per year. under the auspices of our current abortion legislation known as the Protection of Life in Pregnancy Act.

However, these abortions can only be performed if there is a direct imminent threat to a woman’s life, not to your health Most people do not understand the difference. A threat to your health is quite different to the a threat to your life. When your life is in danger you are in mortal danger, when your health is in danger there is some way to go before your life actually is endangered. In some cases the danger progresses slowly, in some cases at a moderate pace and in some cases rapidly. An example of a rapid progression is a woman whose pregnancy has caused her to develop brain bleeds. At any one moment she may only have a risk to her health; blinding headaches, discomfort and nausea, but with a matter of minutes a bleed in her brain could threaten her oxygen supply her nervous system and her life. If this woman were to ask for an abortion doctors could not provide her with one until the moment that in their medical opinion she was actually going to die. If a medic intervened too early the medic could face up to 14 years in jail. If a medic intervened too late than the woman (and the fetus whether viable or not) will die.

If the woman has a diagnosis of terminal cancer and the stress of the pregnancy is causing further deterioration to her health, what then? There was a case in Cork in 2012 where a woman who was terminally ill had to fly to the UK for an abortion, and was too unwell to even board the plane unaided due to terminal cancer. https://www.irishtimes.com/news/state-settled-with-cancer-patient-1.555035

Not the best foundation to practice medicine on.

Alternatively,what if a woman needed life saving treatment but the drugs required were toxic to the developing fetus inside her, could they be administered? If the doctor felt confident that her life was in danger, then technically they could, but if only her health was at risk then they couldn’t. Treatment which if administered earlier might have saved her live when only her health was in danger could (but which would have cuased a fetal demise or toxicity) can only be given when her life is actually in danger at which point the time required for a therapeutic action may have passed.

Dr. Peter Boylan categorically announced at the Joint Oireachtas Hearings in November 2017 that had the 8th amendment not been present in our constitution then Savita Halapanavaar would be alive today and we would never have heard of her.

Savita is not the only such case that we are aware of. We are aware of several cases where women have travelled in order to ensure that an unviable but still heat beat producing foetus can be removed by chemical or surgical means, thereby reducing their chance of dying from infection.

In EVERY case where a woman’s wellness or health is under threat a healthcare professional has to interpret how close that woman is to dying to ensure that treating her doesn’t fall foul of the 8th amendment.

We have for want of a better description Dr. Astbury’s 51% that she mentioned in the inquest of Savita Halapanavaar. She had to be convinced that she was 51% sure that Savita’s life was in danger before she took her to theatre, not 49% not even 50%. Her experience is shared by doctors across the country on a regular basis and prominent obstetricians such as Dr. Peter Boylan and Dr. Rhona Mahony have given written testament to this in various Joint Oireachtas committees and hearings.

Most doctors will testify that in order not to be found guilty of performing an illegal abortion they usually need to be about 70% sure that the woman’s life is in danger before they will consider an abortion. At this stage the woman might be beyond saving.

Read a story of how the 8th amendment affected Lee Martin when her health but not her life became endangered during her pregnancy.

She was told that  the length of time it would take for her health being in danger to change to her life being in danger could be merely a matter of minutes, but until a doctor could clearly establish that it was her life and not her health she would have to carry this baby to term.

If a pregnant woman’s health is in danger she should be treated and valued in exactly the same way as any other individual in society. If her health is directly threatened by the fetus she is carrying she should be offered the option of abortion. She should not be expected to have to endure her condition deteriorating to the point of her life being in danger before this option can be considered.

If the 8th amendment to the Irish Constitution were removed the health and well being of pregnant people in Ireland will be treated in exactly the same way as not pregnant people with respect to diagnostics, tests, procedures and prescribing. The choice as to whether to take the risk of damaging or aborting the fetus they are carrying in order to improve their health will be theirs to decide in conjunction with their family and their doctor. They will not have to undergo a visit to death’s door to find out if they are sick enough to be treated and doctors will not have to watch patients that they know they can make well get sicker and sicker before their eyes.