Removing the 8th amendment: How it will affect those seeking abortion out of Ireland 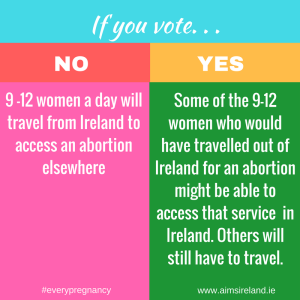 There are several reasons for this. Women have always historically been forced to travel outside Ireland for abortion services.

Self administered medical abortion options are by comparison relatively new and carry an element of uncertainty. Many women don’t find out they are pregnant in time to illegally import medication and self administer them at home in Ireland within the first trimester as medical abortion is not generally indicated for home use after 10 -12 weeks,  There is also the risk that the illegal medications will be seized by customs and not arrive at all and many women do not want tot play the waiting game. Self administering is also currently a criminal offence and if charges are pressed could carry a custodial sentence, which women may find frightening and off putting.

Also many women prefer to ensure that their abortion care involves a medical specialist, and they are not left entirely on their own to procure, to administer to undergo and to assess their immediate well being after an illegal medical abortion in Ireland.

When women travel to another country they want to return as soon as possible after the procedure, often on the last flight home that night and many women don’t have the time or the resources to stay for several days in order to avail of a medical abortion service abroad, as normal practice during medical abortion after 9 – 10 weeks suggests a gap of one to three days between taking the two medicines in a health care facility. Finally, surgical abortion is a definitive end to the pregnancy and many women feel that they know for sure that their abortion is complete with this method.

If the 8th amendment were to be removed, and the Oireachtas were to legislate for abortion up to 12 weeks gestation, then some of the women who would have travelled abroad for an abortion will be able to avail of an abortion in Ireland, either a medical or a surgical abortion.  However, some women will still have to travel to another country, as they will be past the proposed gestational limit of 12 weeks.

AIMS Ireland are currently engaged with the HSE and the ICOG in identifying how a woman centred abortion service in Ireland  could function, and how it would sit within our maternity services and offer the safest possible care for women needing to terminate their pregnancies in conjunction with evidence based counselling and aftercare.

← Removing the 8th amendment : How it will affect medical abortion | AIMS Ireland
Calculating abortion rates: why and how – AIMSI →