The 8th amendment; Its effects on continuing pregnancy

The Association for the Improvements in the Maternity Services have represented service users views for the last 10 years. We provide a support service to people who have had difficulties with the maternity services and we played a vital role in the creation of the National Maternity Strategy 2016 and also in the Standards for Better Safer Maternity Care in Ireland (HIQA) in 2016. In our daily work we find that the 8th amendment influences all pregnancies labours and birth in Ireland and the choices women and health care professionals can make around that. 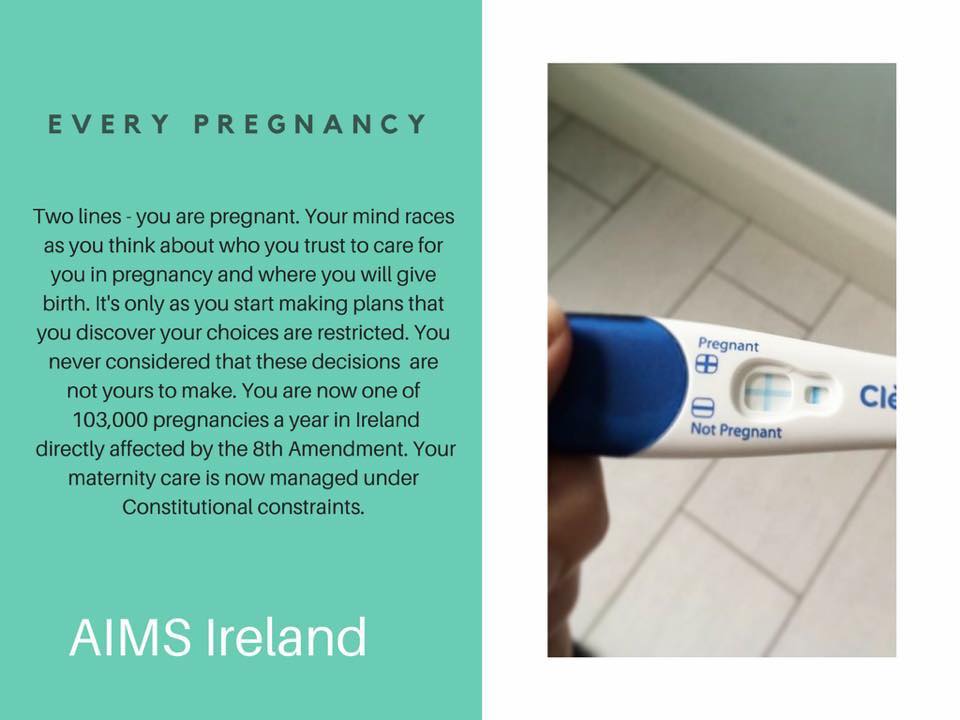 How and why is this the case? 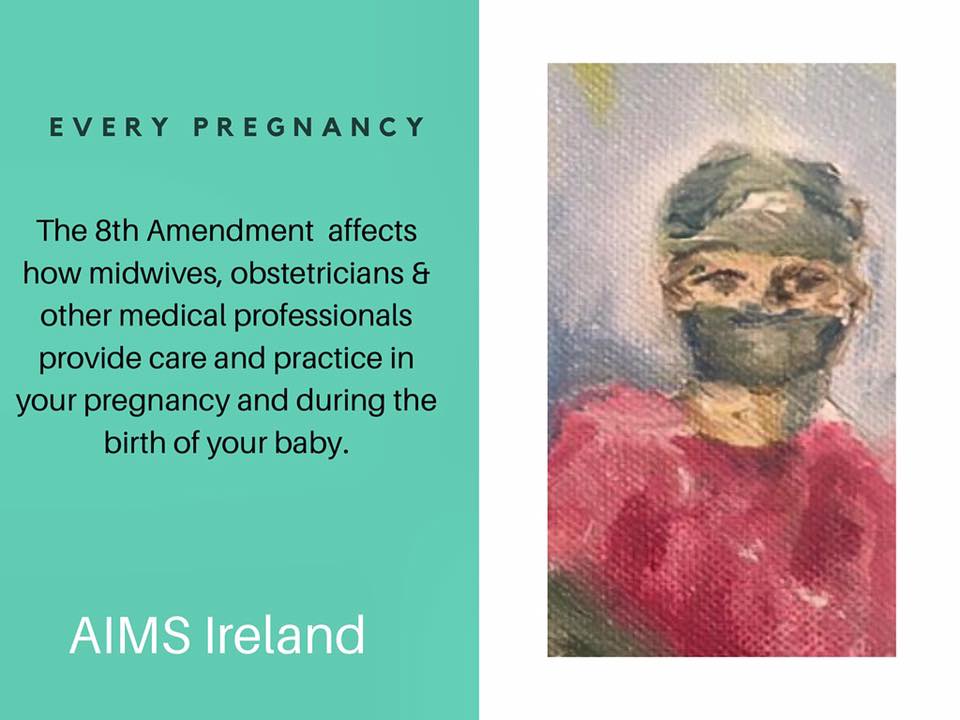 Firstly, it requires interpretation by a health care professional in EVERY case where a woman’s wellness or health is under threat to ensure that treating her doesn’t conflict with the legal requirement of the 8th amendment. We have for want of a better description Dr. Astbury’s 51% that she mentioned in the inquest of Savita Halapanavaar. What does this mean? She pointed out that she had to be convinced that she was 51% sure that Savita’s life was in danger before she took her to theatre, not 49% not even 50%.That is a difficult thing for a HCP to be able to prove in court, that they are 51% sure. How different is that from 49% which would make their actions illegal?  Does it mean that they wait until they are 75% sure, to be sure to be sure? Percentage reckonings like this can have serious adverse consequences for women’s health, even for their lives.

Her experience is shared by doctors across the country on a regular basis and prominent obstetricians such as Dr. Peter Boylan and Dr. Rhona Mahony have given written testament to this in various Orieachtas committees. 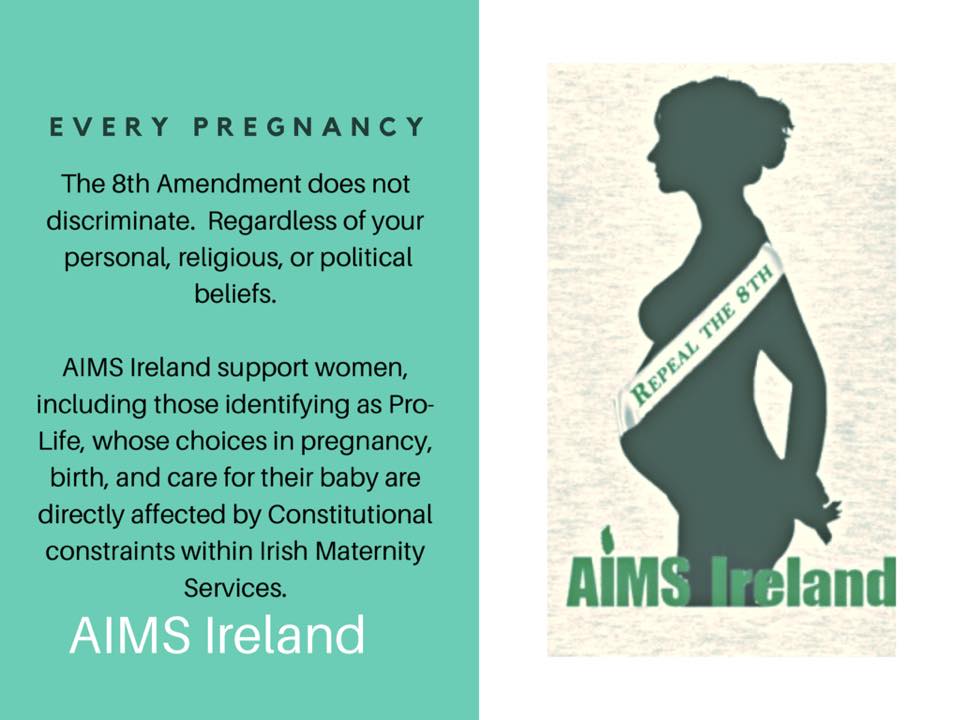 The 8th amendment limits the bodily autonomy of every pregnant person in Ireland. It does so via the HSE s National Consent Policy, which makes special provision for pregnant people. Note Section 7.7.1 which states

“Because of the constitutional provision on the right to life of the unborn there is significant legal uncertainty regarding the extent of a pregnant woman’s right to refuse treatment in circumstances in which the refusal would put the life of viable fetus at serious risk. In such circumstances, legal advice should be sought as to whether an application to the High Court is necessary.”

Yet we had PPvs HSE in which a 15 week old fetus had legal representation and in which the mother was kept alive on somatic support until a High Court sitting granted the family’s request for the somatic support to be switched off. Surely this was by all accounts a non viable fetus? Why was the 8th amendment interpreted in such a cruel and conservative way? Answer: because it can be. 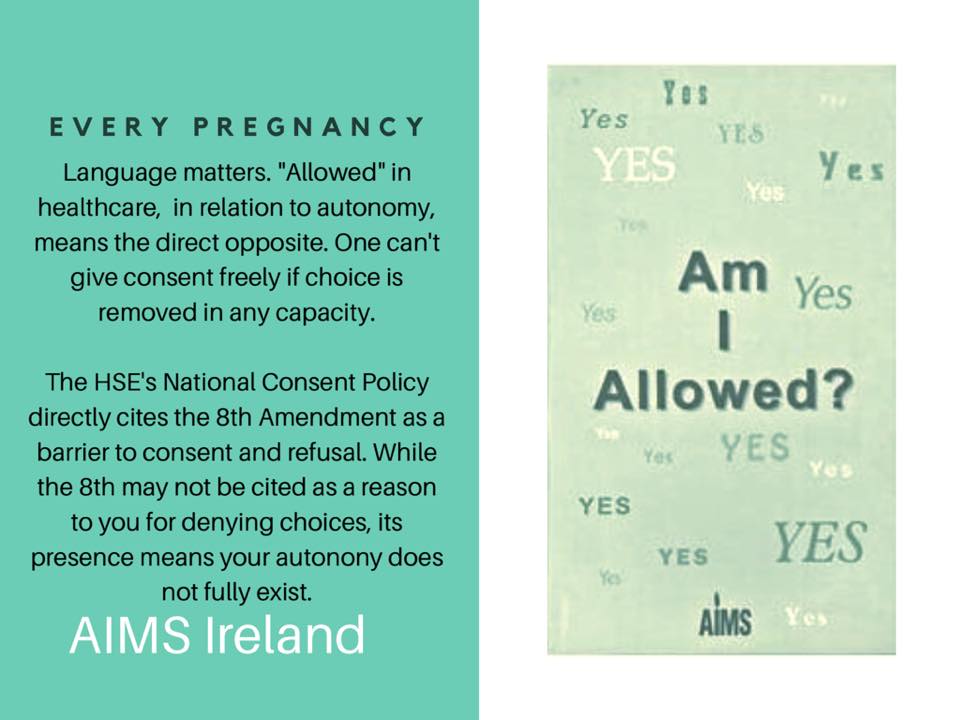 EVIDENCED BASED HEALTHCARE MAY BE LIMITED OR DENIED

Examples of the spectre of the 8th amendment in action in our maternity services come in the form of coerced inductions, coerced c sections and various other invasive procedures such as episiotomy artificial rupture of the membranes which women are UNABLE to refuse without being told that they are endangering the life of their baby (irrespective of whether they are or not) and in which women get routinely told that if they don’t accept the intervention or procedure “the guards will be called” or that they will be taken to court.

Article 40.3.3 leaves the door open for obstetric preference or hospital policy to use the 8th amendment to override informed consent and refusal. This can and does happen.  If a HCP disagrees with a mother’s birth preference, they can declare it ‘unsafe’ for the as yet unborn baby and the courts can be used to force a mother to comply with a procedure she does not consent to, or according to evidence-based research that she may not need.  A pregnant person does not have the right to uphold informed decisions regarding her care in pregnancy. 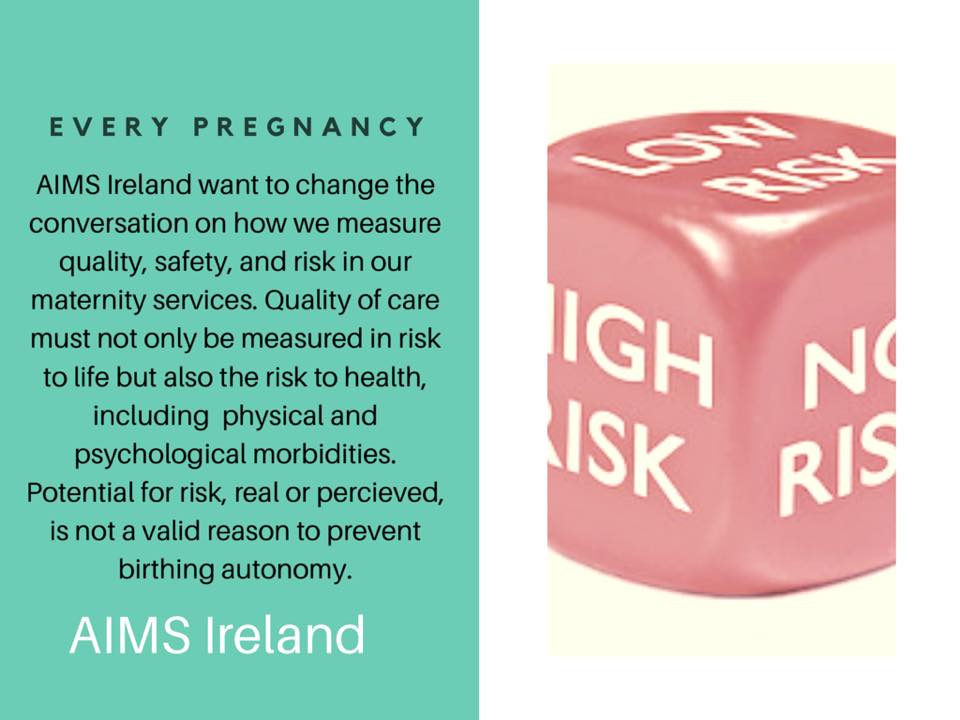 The truth is that every pregnancy in Ireland is affected by the 8th amendment. It affects labour and childbirth. It affects where, when and how a pregnant person wishes to birth. It overrides any preference verbally stated or written in a birth plan.

In November 2016, the HSE went to the High Court in an attempt to force a woman to undergo forced sedation and a forced Cesarean birth  after she refused consent to the procedure. The woman had wanted to give birth vaginally after 3 previous caesarean births.  But the hospital disagreed and took her through the courts. Thankfully the judge regarded the HSE’s request for a court order as “a step too far”, and the woman was not forced. However, sometimes its merely the threat of an appearance in the High Court than is enough to force a woman into a procedure that she doesnt want or believe is right for her or her unborn baby. AIMS Ireland have supported other mothers also, who have refused consent and have had a trip to the courts, heavily pregnant.

Women are often emotionally traumatised by these experiences and when they research the evidence supporting these decisions that they have been forced to take afterwards they find that in fact there was often little or no evidence that they “Should” have been given certain procedures. In fact what happened was that they were coerced using the instrument of the 8th amendment.

Pregnant people in Ireland including those with wanted continued pregnancies do not have full control over their care and over their choice of care. Women in our maternity services may be ALLOWED to have or not have certain procedures, but with the 8th amendment in place they can never exercise full bodily autonomy. If the woman sitting on the bus next to you is pregnant, then she will have fewer human rights in Ireland than you do even though she may pay the same taxes and have the same right to vote. 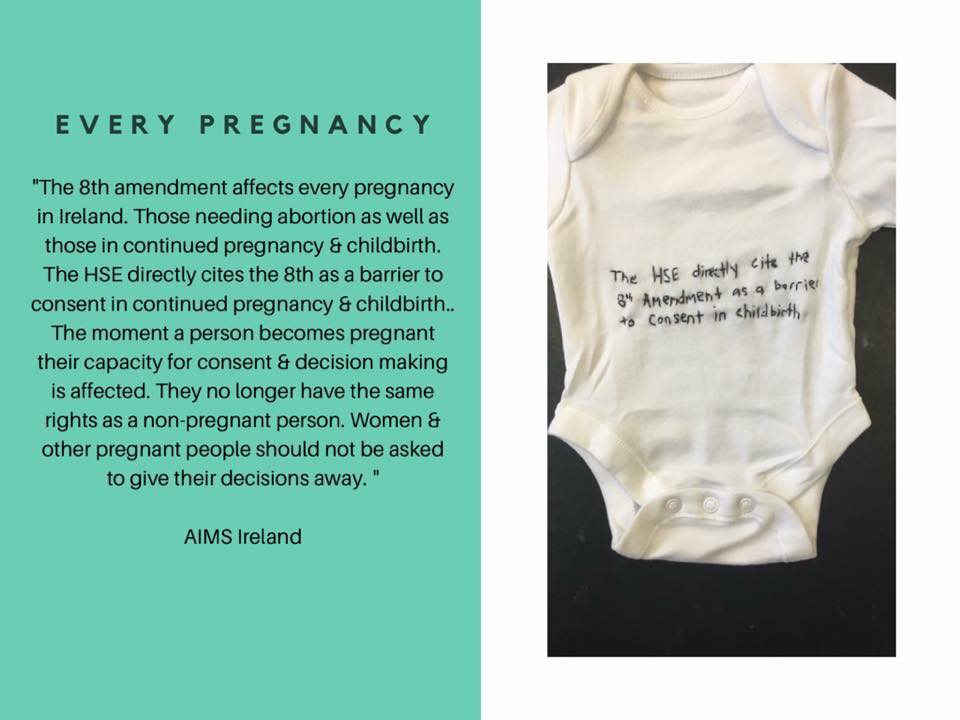 Nothing is more heartbreaking than noticing the signs that a wanted pregnancy might not be going to plan. Or alternatively there may not be any signs and a pregnant person is already into their maternity clothes when they get the news that their 7 week, 8 week, 10 week 12 week or 14 week baby is not growing, that there is no development beyond the initial creation of an embryo, that this pregnancy will result in miscarriage. Many women choose to let nature take its course, but beyond a certain time, a missed miscarriage especially a late missed miscarriage may introduce infection, so there comes a time when international best practice will suggest a D and C or chemical management. This is an option not available to women in Ireland when there is still a weak fetal heart beat. This is what happened in the case of Savita Halapanavaar. Other women actively want a D and C or chemical intervention once the pregnancy is declared non viable.

The presence of a weak heartbeat in a 8 week old embryo prevents most HCPs carrying out a D and C or administering drugs to complete the miscarriage and the woman is told to return next week when there will in all likelihood be no heartbeat and she will get the procedure. However, that is not always the case, we have many reports of women who have had to return every week for up to six or seven weeks each time to be told that their fetus has not grown, never will grow but still has a very weak heartbeat. The 8th amendment prevents women having that choice in what is a very emotional and difficult time for them. 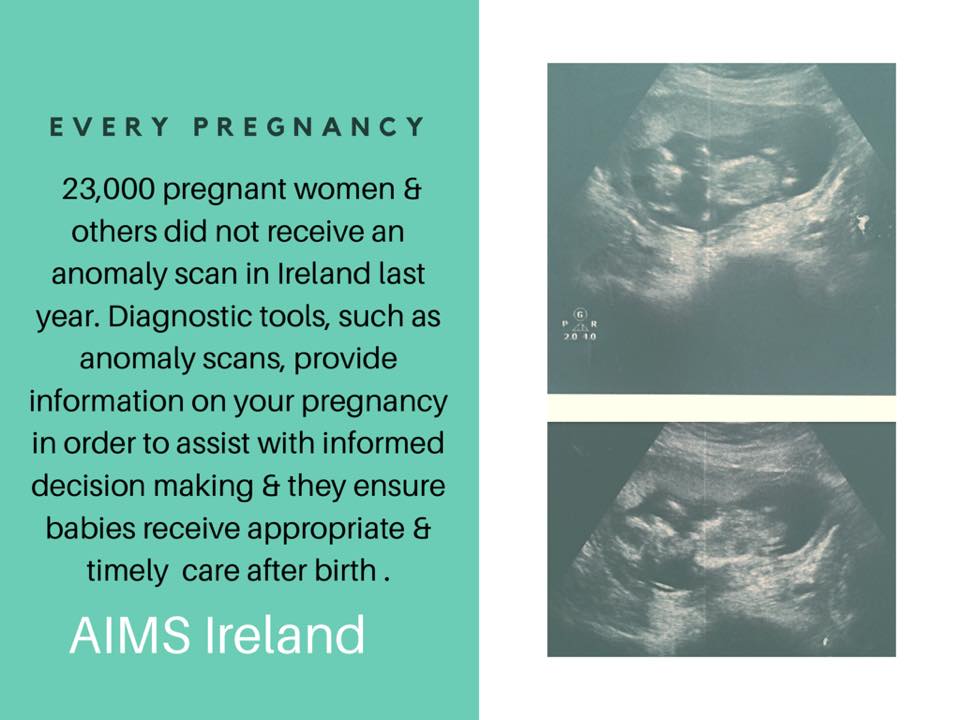 The 8th amendment also prevents termination for medical reasons in Ireland. The agony of not being able to have this choice in Ireland is is well documented by the Group Termination for Medical Reasons It has also been suggested that one of the reasons well being scans are not routinely offered in Irish Maternity Hospitals is because of this issue. 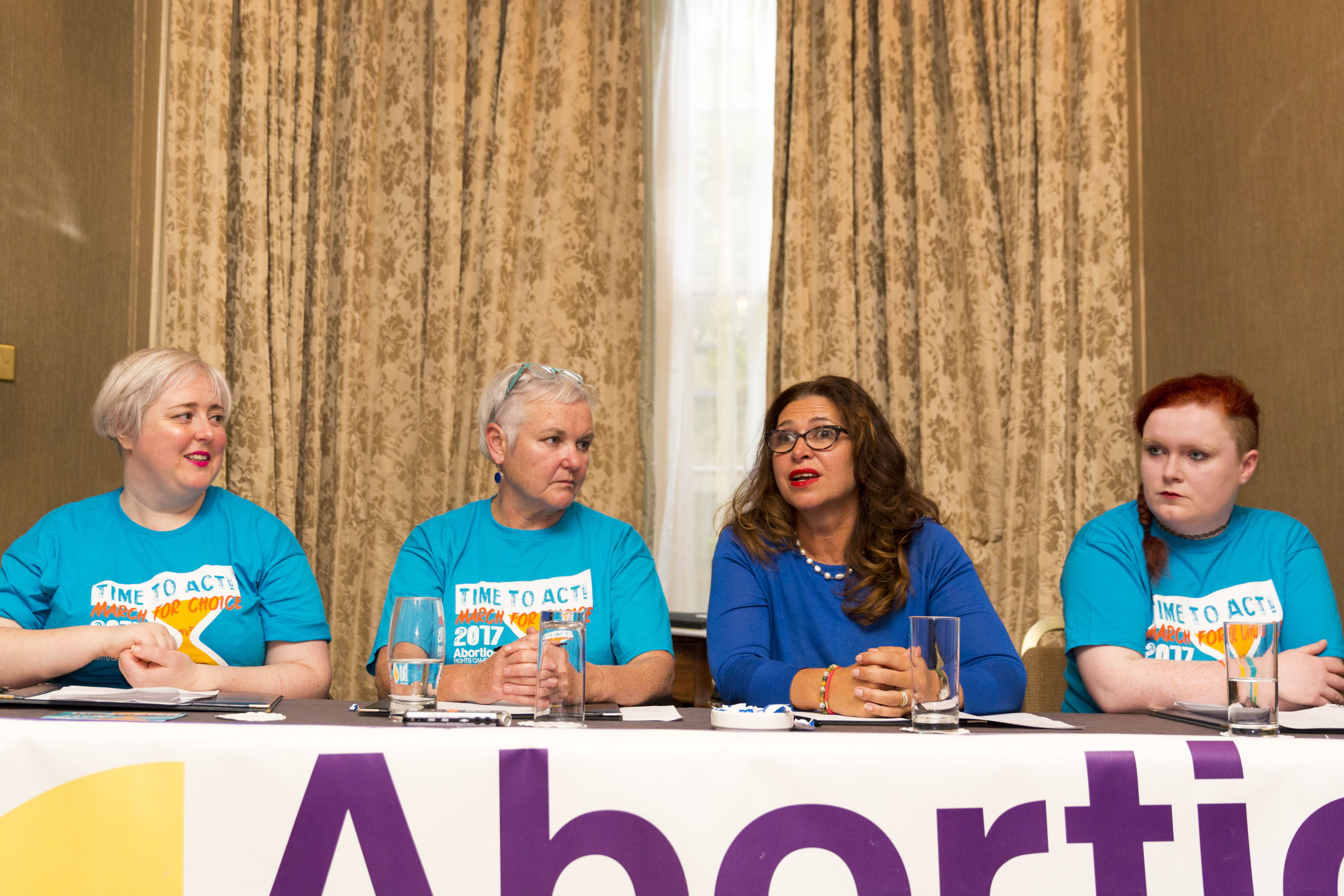 Abortion including termination for medical reasons happens anyway, 8th amendment or not. We believe that a modern women’s healthcare service for Ireland should not leave women to face the safe medical intervention of abortion in a way that is frightening, expensive, unsupportive and discriminatory. In all maternity and gynaecological care women should be supported, treated with kindness and compassion and listened to. They should not be forced to travel to another country to receive basic health care they should be entitled to it in their own country, freely safely and legally. 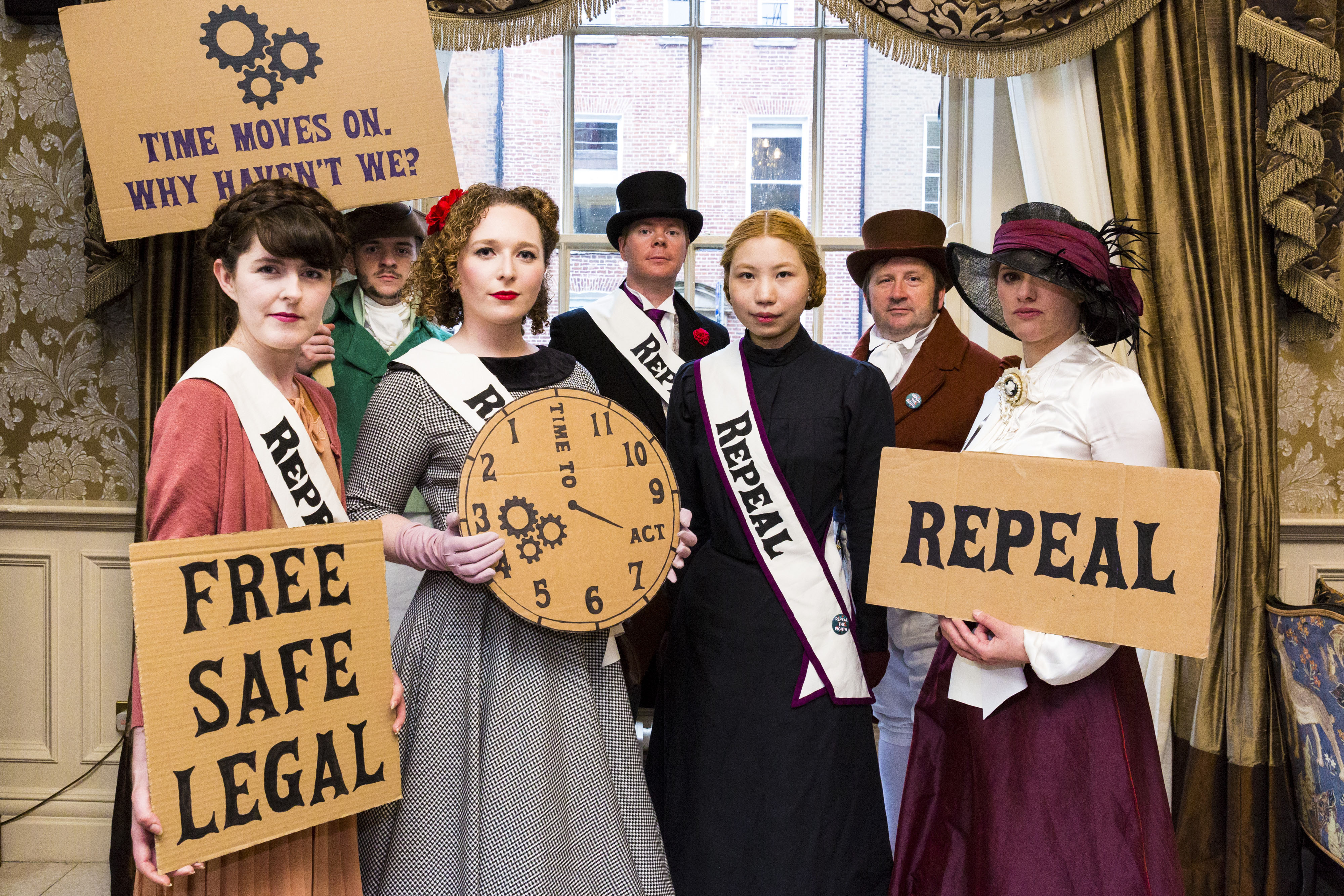 1. Evidence based maternity care in Ireland is limited or denied by the presence of the 8th amendment (article 40.3.3 of the Irish Constitution)

3. The healthcare professions are strangled in terms of providing obstetric and gynecological care by the presence of the 8th amendment in the Irish Constitution. yet, they can also use it as an instrument of coercion in pregnancy labour or childbrith.

4. The 8th amendment  to the Irish Constitution affects every pregnant person in Ireland.