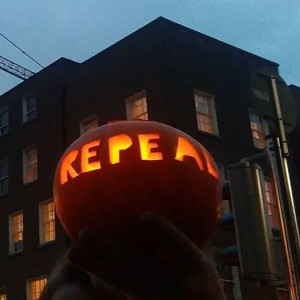 These points relate to the case of HSE vs B. The in-camera reporting of the case was lifted on 2nd November 2016, over a month after the original case was heard. The case relates to the HSE who took a heavily pregnant woman, Ms B to the High Court to seek an order for a forced sedation and c-section against the woman’s consent.

Ultimately this case highlights supporting a woman’s right to weigh risks for and against each care option and make the best decisions for her in her current circumstances taking on board her medical history. The unit refused to engage and instead decided threatening her & taking her to court was the best option. And they were backed by our National Health Service under Constitutional personhood law. The foetus, like many other cases, had its own legal representation against its mother.

If we want to make it about “risk”, if discussing the 3% chance of uterine rupture, we must discuss all the risks and that it’s up to the woman to weigh them out. There are real and substantial risks in repeat Caesarean; most severe maternal morbidities in Ireland (the near misses) are involving repeat Caesarean section. There are no absolutes in maternity care, it’s about balancing risk and making the decision you feel safest in *at that moment * with scope to revisit the issue if medical indication arises. As in this case. The woman requested a Caesarean when she no longer felt vbac was a safe option. Women are not stupid. Women do not take risks. They make good decisions for themselves and their baby. They need to be supported, not violated and threatened.

Find out more on this case here http://www.irishtimes.com/news/crime-and-law/judge-refused-to-order-woman-to-undergo-caesarean-section-1.2852130

← Statement from AIMS Ireland on the lifting of In-Camera status in the case of Mother B vs HSE heard in the High Court, Dublin on 30th September 2016
Statement from AIMSI on the publication of the MAMMI STUDY →