On the 16th OF February AIMSI Ireland were invited to make an oral submission to the Oireachtas Joint Committee for Health on the implementation of the National Maternity Strategy. AIMSI Chair Krysia Lynch and Vice Chair Breda Kearns attended along with obstetricians Louise Kenny and Peter Boylan.

AIMS Ireland’s written submission can be read here and the proceedings can be watched here.

The key areas that AIMSI addressed were based on the result of our surveys and also on the result of the Public Consultation carried out as part of the National Maternity Strategy’s deliberation. 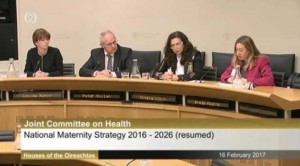 When we were invited to participate on the Steering Committee of the National Maternity Strategy by the then Minister of Health Leo Varadkar, we were in a position to inform the Steering Committee on the views and opinions of women and their families based on our recent survey in 2014 of 2,832 users of the maternity services in Ireland.  All of the main issues highlighted in our survey were replicated by the Public Consultation carried out as part of the National Maternity Strategy, and we refer the Joint Committee to them. AIMSI were delighted to see the strategy published in January 2016 and we hope to see its full implementation.

As the public consultation showed, they key issues for the users of Ireland’s maternity services are choice in model of care, geographic equity in the provision of care, the importance of informed consent, partnership and trust between caregiver and service user, the lack of midwifery led services (despite the overwhelming international evidence to show it is the safest model of care for women experiencing a straightforward pregnancy), the lack of community midwifery and homebirth services, sub-optimal breastfeeding support, an inadequate provision for perinatal mental health, the lack of service user representation at local regional and national level, and the lack of adequate advocacy and audit services. AIMS Ireland welcome the inclusion of all of these aspects in the recommendations of the National Maternity Strategy. There are several areas which we feel need to be implemented without delay.

Firstly all women irrespective of where they live should have access to the three pathways of care; supported, assisted and specialised, in the three different settings outlined in the strategy; namely at home, at an alongside birth centre and at a specialised birth centre. The latter already exist in all of our units but the second is only currently available in a handful of units and there is only one unit offering a homebirth service at present.

Secondly, we would urge the minister to implement the recommendations associated with perinatal mental health. Outcomes and safety of maternity care are generally measured in terms of physical mortality. The experience of giving birth is both physical and emotional and we feel that women’s emotional wellbeing also needs to be evaluated and addressed in terms of safety outcomes. The area of perinatal mental health remains particularly under resourced, yet admittedly conservative figures show antenatal depression and anxiety at rates of 17-18% and postnatal depression at 18-19%. Whilst there are current plans to invest in specialist mental health services, women with sub-clinical conditions such as depression or anxiety will not be covered under these plans. We would see the need for improved provision in this area as vital.

Thirdly, the most frequently commented area in the public consultation related to the suboptimal provision of breastfeeding support. Breastfeeding is the building block for the future health of the nation and we urge the Minister to ensure the publication of the National Breastfeeding Strategy and also ensure that adequate importance is placed on the breastfeeding recommendations in the strategy. I thank the committee.

I thank the chairman and members of the committee. The first recommendation of The National Maternity Strategy was that an implementation plan be set in place within six months of the strategy being published. It is our understanding that there is still no implementation plan in place and if an implementation committee has been formed we have not been invited to participate. Therefore, for the woman and her family on the ground currently using the services the National Maternity Strategy has changed nothing so far.

Speaking as a rural service user, I would like to highlight three things to the committee. Firstly, the options of care and birth choices in Ireland remain a postcode lottery. This is especially true for women living in rural areas where choices are currently extremely limited, and where individual clinicians are able to determine ethos and approach to care, and where the threat of hospital closures and the need to travel even great distances in labour remains a very real concern.

We would urge the Minister to ensure that timely access to maternity services continues to remain an option for all rural women and the threat of small maternity unit closures are removed. We understand that in Northern Ireland smaller rural units became alongside birth centres if they were unable to maintain full tertiary services. Other options also exist and are referred to in our briefing document.

Secondly, the woman’s experience still remains undervalued and is rarely used as a learning tool. The need to fully and independently audit women’s experiences is vital and is alluded to in the recently published National Standards for Safer Better Maternity care and should be acted upon without delay.

Thirdly, the area of informed consent remains a concern for women. Last year a woman was taken to the High Court (Ms B vs HSE) in effort to override her right to informed choice and informed refusal.  Ms B won her case.  In order to avoid further such cases at great expense to the tax payer and threats to women of “The High Court”, we would like to see the Strategy’s recommendations regarding informed consent and informed refusal implemented in all care settings as soon as possible.

It is our view that many aspects of the maternity strategy could be implemented by restructuring services, and whilst some areas are resource heavy, many are not.

It is our view that the National Maternity Strategy will be unlikely to be implemented in full. The primary reason in our opinion is not due to lack of resources or funding but due to the threat that the strategy places to the status quo.

It is also our view that despite the admirable intention to place the woman and her family at the centre of care, the Strategy’s recommendations appear to currently be undergoing a process of cherry picking in order to selectively increase resources in particular areas of maternity care at the expense of others. I thank the committee.

← AIMS Ireland Response to the Citizens’ Assembly: Article 40.3.3 in the Delivery Room
BREAKING NEWS: AIMS IRELAND RESPONSE TO THE PROPOSED RELOCATION OF THE NATIONAL MATERNITY HOSPITAL TO A SITE OWNED AND GOVERNED BY THE SISTERS OF CHARITY RELIGIOUS ORDER →