First time mothers struggle to avoid an intervention in labour

The HSE has released detailed figures of birth statistics from Ireland’s 19 public maternity units for 2012 on foot of an FOI request from maternity services advocacy organisation AIMS Ireland. The figures are broken down into first time mothers and mothers who have already given birth and provide important information on the rates of C-sections, instrumental deliveries, episiotomies and vaginal births after Caesareans in Ireland.

The data shows a stark contrast in the level of interventions that a first time mother experiences compared to women who have given birth previously. C-section rates for first time mothers varied from 22.95% in Sligo General up to 40.15% in St Luke’s Hospital Kilkenny with both units also reporting extremely low vaginal birth of Caesarean rates at 0.93% and 3.51% respectively.

Instrumental deliveries and the use of episiotomies were also very high in most units across the country. Over 35% of first time mothers in Cork University Maternity Hospital (CUMH), University College Hospital Galway and Waterford Regional Hospital had an instrumental delivery with forceps or vaccum. The National Maternity Hospital in Dublin and CUMH both had very high rates of episiotomies performed on first time mothers at 39.4% and 38.78% respectively.

Commenting, Krysia Lynch, co-chair of AIMS Ireland said: “There are a number of concerns raised by these figures. In the first instance, the rates of interventions to first time mothers are worryingly high. It points once again to the inappropriateness of a consultant-led care model for healthy, low risk mothers. There is no medical reason for such high levels of intervention and the effects of these interventions on first time mothers will influence the outcome of any future pregnancies they may have.

Lynch continued: “AIMS Ireland is concerned about the accuracy of the figures reported to the Healthcare Pricing Office as there seems to be some discrepancy in figures provided to ESRI and figures published by the hospital themselves. Additionally, these figures published today suggest that four out of 19 maternity units did not record any vaginal births after Caesareans in 2012. The only units which would have a 0.0% VBAC rate should be midwife-led units (MLUs), which do not book women who have had a previous Caesarean. We would seriously question the accuracy of this and query the quality of data recording and reporting going on in units around the country.”

“Looking again at the vaginal births after Caesarean (VBAC) figures, with exceptions in a small amount of maternity units, the amount of VBACs taking place around the country as a percentage of overall births is very low. This indicates that women are not being supported by their local maternity unit to have a VBAC if they so wish. Our own national obstetric guidelines recommend that a woman should be referred to a consultant or unit who is prepared to facilitate her request. There are obviously care provider barriers here that need to be addressed.” she concluded.

The statistics are available to download from the AIMS Ireland website. AIMS Ireland have also produced infographics to simplify the data and for ease of sharing. 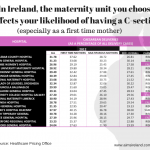 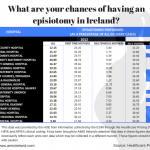 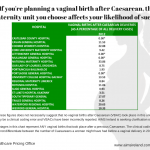 ← Maternity services consumer group welcomes Rotunda’s decision to withdraw from homebirth MOU – HSE Home Birth Service should be fit for purpose
Have YOU had a baby in Ireland in the last 5 years? Tell us about your experience of maternity services →