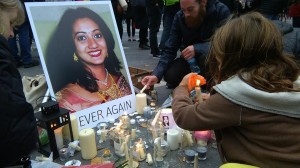 Savita and Praveen Halappanavar, who are expecting their first baby, arrive at Galway University Hospital.

The 31-year-old dentist, who is 17 weeks pregnant, attends hospital because of back pain.

She is diagnosed with lower back pain, advised physiotherapy and sent home.

Treating doctors now accept that this back pain was actually caused by contractions prior to miscarriage.

About two hours later, Mrs Halappanavar returns to the hospital with more pain, and complains of a dragging sensation.

There is a foetal heartbeat, but she is not given an internal examination.

Blood tests are taken. These later show an abnormally high white blood cell count – a key signal of the risk of a sepsis infection – but these results are not relayed to her medical team.

Dr Katherine Astbury says she is working on the basis of clinical signs alone.

In the early hours, Mrs Halappanavar’s waters break and she is told about the risk of infection.

A scan shows a foetal heartbeat.

Savita asks a midwife if there is any possibility of saving the baby and is told it would not be possible.

The phrase “inevitable miscarriage” is recorded in her medical notes.

Savita is put on antibiotics to guard against infection.

Aware that her baby will not survive, Mrs Halappanavar asks her consultant Dr Astbury for a termination.

The consultant tells her that “in this country it is not legal to terminate a pregnancy on the grounds of poor prognosis for a foetus”. A foetal heartbeat is present and her life is not at risk so it is not legally possible to carry out the termination.

Midwife manager Ann Maria Burke tries to calm an upset Savita and explains that the termination cannot be carried out because Ireland is “a Catholic country”.

Ms Burke told the inquest she did not mean it in a hurtful way and was sorry if it sounded bad now.

Dr Astbury does not make a note of the termination request on the medical file.

She told the inquest that if she worked in a country where abortion was legal, Savita would have been offered one.

The student nurse (unnamed) says she tried to bring this information to the Senior House Officer Dr Ikechukwu Uzockwu.

Dr Uzockwu denies being told this information and says he was told her vital signs were normal.

No doctor examines Savita through the night. Her vital signs are not checked every four hours, which is hospital policy.

4.35am Praveen sleeps on the floor by Savita’s bed. She complains of cold. Her teeth are chattering and she is shivering.

She is given a blanket.

Her heart rate is not checked.

6.30am Savita’s temperature is raised. Her heart rate is twice what it was on Sunday.

Midwife Miriam Dunleavy told the inquest she had never seen a patient deteriorate so quickly in two hours and described the change as “frightening”.

Dr Uzockwu notes a foul-smelling discharge and diagnoses an infection of the foetal membranes. He puts Savita on stronger antibiotics and orders tests.

She does not read the notes herself and is not told about the discharge by the register looking after Savita, Dr Anne Helps.

She is told about the infection diagnosis and expresses concern.

She says she may have to carry out a termination despite the heartbeat. More tests are ordered and more antibiotics prescribed. Sepsis is diagnosed, rather than severe sepsis, because her blood pressure is not low.

She told the inquest she would have carried out a termination sooner had she been told about the discharge.

Savita’s lactate level is tested, a sign she is going into shock, but the test is rejected because it is in the wrong bottle.

The medical team on the ward is not told about this.

After consultation with a senior colleague, Dr Astbury decides to carry out a termination.

Her condition deteriorates and she is transferred to a high dependency unit.

Dr Astbury told the inquest she felt Savita’s life was in danger.

3am Savita’s condition deteriorates further. She is suffering from septic shock and is moved to intensive care.

Through the day, she is given drugs to increase her blood pressure, drugs to help her bone marrow function, and drugs to reduce the pressure on her heart.

Her lactate level is extremely high and does not appear to be reducing, despite what is described as “valiant efforts” by consultant anesthetist Dr John Bates.

Blood tests reveal she has septicaemia due to E coli ESBL.

Praveen is advised to tell her family she is in the intensive care unit.

A nurse tells him that his wife’s life is on the wire.

He goes to the hospital chapel to pray.

Savita is critically ill and doctors do not expect her to survive.

A number of friends have come to the hospital to be with Praveen.

Savita has an unrecordable blood pressure, an extremely high heart rate and is sedated with morphine.

Her body is swollen and she is unresponsive. She is on dialysis.

Praveen and some friends are brought into the room with Savita.

Alarm bells start ringing and Mrs Halappanavar is given drugs to help her breathe, but she is barely conscious.

At 12.30am, Savita’s heart stops. The medical team start CPR.

Intensive care nurse Jacinta Gately leaves the unit to find Praveen. She asks him if he wants to be present as the team attempts to revive her.

She tells him it will be difficult and a friend accompanies him.

CPR continues for some time until doctors stop.

Savita passes away at 1.09am, just slightly less than one week after she had arrived at the hospital with back pain. 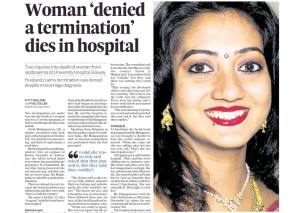 Timeline courtesy of Coalition for Repeal of the 8th Amendment